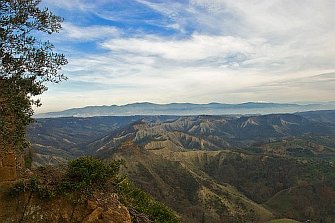 In the unusual landscape of the Calanchi Valley (eroded clay hills), Civita di Bagnoregio stands out. Situated almost half-way between Orvieto (20 km) and Viterbo (30 km), it is known as the dying town because of the continuous erosion which over the years has reduced the town centre in size. This lovely corner of Italy, the birthplace of Saint Bonaventura (1217-1274), used to be an active centre until several earthquakes and landslides forced the local inhabitans to abandon the town. From the distance Civita di Bagnoregio seems like a ghost town floating in the air: in fact, it is only connected to the surrounding countryside and to the New Bagnoregio by a long foot bridge suspended in the air. 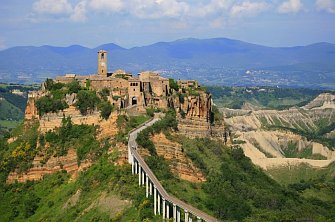 Civita di Bagnoregio is situated on top of a hill (1400 ft. a.s.l.) between two valleys running in an East-West direction and in which two streams flow: the Rio Chiaro to the North-East and the Rio Torbido to the South. The hill is made up of a layer of tufa (a soft volcanic stone typical of central Italy) which was formed after a series of volcanic eruptions thousands of years ago.

This layer of solified lava lies on an unstable base of clay and sand. The clay on the buttom of the valleys is constantly eroded by the two streams and washed away by the rain, leaving bare portions of the tufa bank above, which, without a solid base, soon break off and fall to the bottom of the valley. Yet Civita di Bagnoregio continues to resist, clinging to the top of its pinnacle. 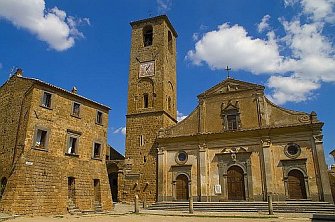 One enters the town through the Gate of Santa Maria (dating back from the Middle Ages as well as most of the buildings to be seen around). The charming Church of San Donato, giving onto the main square, with its romanesque bell-tower was founded in the VIII century, although the existing façade was renewed in the XVII cent. Nowadays only about twenty people live in the town all year round, in the summer the population is about 300. The few inhabitants take very good care of their houses and streets which are extremely well maintained, clean, flowers everywhere. Only few houses are in very poor conditions with their windows opened wide over the emptiness, their façade with nothing behind them. 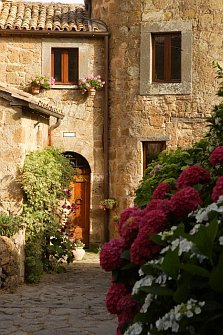 As Bagnoregio was founded by the Etruscan people (possibly in the 8th century B.C.) many evidences from that Era are still to be seen in the territory: several chamber tombs excavated around the ancient city (such as the so-called cave of San Bonaventura), remains in private cellars and the Bucaione (the big hole), a sort of corridor (tunnel) dug in the rock under the town, from North to South, leading to an ancient etruscan Necropolis. It is now used as a footpath for reaching a magnificent chestnut wood or for adventuring out on to the calanchi to enjoy an incomparable landscape. All around you deep valleys of steep clay slopes, high sharp edges of the hard crests of clay protude from the sandy hills, incredible pinnacles which change profile and shape as they are continually buffered by wind and rain. One of the most spectacular calanchi formation is called the cathedral, beeing shaped like an enormous church.
As reviewed by world trusted "Rick Steves" on his "Best Italy Destinations":