According to legend, Montalto was founded in the 5th century A.D. by the inhabitants of a coastal city who withdrew to the small elevation where the ancient village now stands, in order to defend themselves from raids by pirates and then the incursions of the Saracens.

Montalto emerges from legend and enters history in 853 A.D. following a bill by Pope Leone IV adressed to Virobono, Bishop of Tuscania. The name Montis Alti appears for the first time.

The papal document states that the Monti Alti Castrum belongs to the Diocese of Tuscania which it also served as port. The Montis Alti Castrum formed a boundary, both in relation to the Saracen-infested sea and in relation to Tuscany, which was occupied by ostile Longobards and, also because of its immense, uncultivated, pestilential territory, soon became a valuable stronghold, a castle, a castrum.

Orsini Castle, famous monument of Montalto, also has a legendary origin. Its dates back to Desiderio (VIII century), duke of Tuscia, then king of the Longobards. For centuries the Montalto territory was devastated by the struggle sustained by the powerful barons of Vico, feudal lords of Montalto since the middle of the 12th century, against the Pontiffs and the States allied to them.

This long strggle between the Popes and the barons of Vico almost annihilated the Montalto Castle: the countryside was in ruins, the houses abandoned, and the population decreased fearfully.

To prevent Moltalto being erased from the land and from history, Pope Martino V published a bill on 28 february 1421 in favour of the few Montaltesi remaining in the region, and also took an interest in the state of the land, the ruined houses and the abandoned vines. After the defeat of the powerful lords of Vico in 1359, Montalto Castle started to pass from hand to hand.

It was dominated by the Orsini, by Angelo Ventura known as Tartaglia, by other lords and, naturally, by the Popes. With the constitution of the Duchy of Castro, in 1537, decreed by Pope Paolo III Farnese in favour of his son Pier Luigi, Montalto (and the other towns included in the duchy) enjoyed a period of tranquillity.

With the destruction of Castro in 1649, decreed by Pope Innocenzo X, the Duchy of Castro was re-confiscated amongst the goods of the Church. The unit of land was split up and granted as a concession to various lords. In 1870, with the taking of Rome, the dominion of the Popes ended. Montalto entered the unitary state. 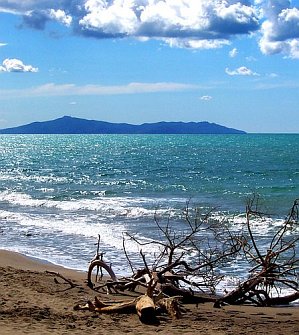 The historic centre and surroundings of Montalto

Small squares, alleyways with overhanging arches, surrounding walls and the urban structure of the historic centre very charmingly point to the medieval origin.

The centre is dominated by Orsini Castle, the ancient heart of which consists of an imposing quadrangular tower. Probably constructed in the 15th century by the Orsini, as recorded by the stone placed on the tower, the castle subsequently underwent numerous restructurings.

It was raised one floor at the end of the 18th century, and the loggia and current battlement were added during last century.

If you walk along via Vulci, you will come to a door in the northern section of the walls; from here, you can access piazza Felice Guglielmi, which is overlooked by the neoclassical facade of Santa Croce.

The inside has a single nave, and above the altar, preserved inside a glass case, is an exquisite painting, showing La Madonna della Vittoria.

If you take via Soldatelli, you end up in front of the lovely eighteenth century facade of the parish church of Santa Maria Assunta.

Above the travertine door, the building shows the coat of arms of Pope Pio VI Braschi, who instigated its complete reconstruction in 1783. The inside, with a single nave, is adorned with interesting paintings from the end of the 18th century.

Preserved in a case on the right are the relics of Quirino and Candido, patron saints of Montalto. The Palazzo del Comune (town hall) is located in piazza Giacomo Matteotti. This building, originally a Franciscan convent, was subsequently transformed into a fortress by the Farnese and encircled by walls.

Outside the historic centre, close to the via Aurelia, the eighteenth century fountains of the Tre Cannelle and del Mascherone can be found, both with long epigraphs surmounted by the municipal coat of arms.

Along the road for Marina di Montalto you can see, on the left, San Sisto church, constructed by the Augustinian brothers, probably in the 18th century, and subsequently transformed first into a lazaretto and then into a hospital.

Continuing along the Aurelia, you pass the hamlet of Pescia Romana and then come to the Palazzo del Chiarone, the ex-pontifical customs house. With around 90 rooms, a large papal apartment, stables and prison, it is now, unfortunately, completely abandoned. In the environs of the built-up centre, you can see the eighteenth century Archi di Pontecchio.

Finally, near the Castello della Badia (Vulci), the Casale dell'Osteria is preserved, a valuable example of farmhouse architecture dating back to the time of land reform. 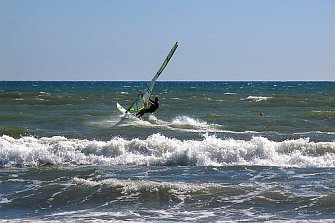 Near the mouth of the Fiora is a massive building, which probably acted as grain store, and a square tower, recently restored, probably built in the 15th century.

Further south, in the locality of Punta delle Murelle, the ancient structure of Regisvilla port can be seen a short distance from the bank.