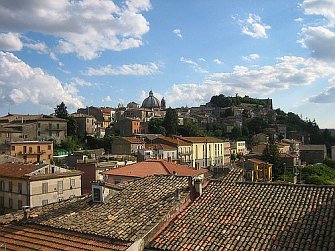 Montefiascone, at 633 meters a.s.l., is the highest town in the province of Viterbo. From there a magnificent vista opens up of the plains below the Volsini mountains while from the west one enjoys the fascinating belvedere of Lake Bolsena. Its name, perhaps, derives from fiascone a large wine container in honour of the rich wine production in the area. The roots of Montefiascone go back a long way. Neolithic tombs, probably dating back from 1800 B.C., which were hewn in the rock at Rinaldone are even prior to the Etruscan civilisation.

The development of Montefiascone, like its history, was strongly linked to the Via Cassia which played an important role in all ages - connecting Rome to central Italy, the Padana Plain and on to France (which gave its name the Francigena. Given its strategic position, the Popes and Bishops of Rome had the Centre fortified so that the people of the surrounding area could defend themselves from the frequent barbarian attacks. 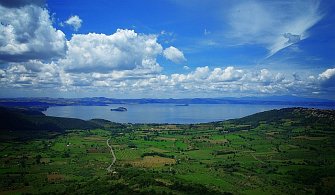 In the second half of the thirteenth century an imposing military fortress was also built, later during the Renaissance modified and restored by the architect Antonio da Sangallo the Younger. Many Popes were involved in the continued fortifications over the following centuriesope Leo X (Medici Pope) loved to spend the summer in Montefiascone often inviting illustrious guests such as Michelangelo. The papal fortress, recently well restored and beautified, is today often used for cultural events. 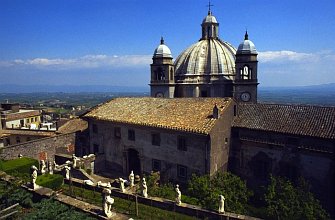 Cathedral of St. Margherita
The structure was planned prior to 1300 but work didnt begin for more than 100 years. The church, octagonal in plan, is surmounted by an enormous dome (third largest in Italy) built by Carlo Fontana (mid- 1600s) which is today the symbol of the city. The interior is richly decorated with paintings from 1800 and there is also a bust of S.Margherita. It is also possible to visit the beautiful crypt which lies below the main church.

Basilica of S. Fabiano
Around the mid-ninth century an original church was built dedicated to the Virgin Mary and later was dedicated to San Flaviano, a martyr during the time of Giuliano lApostata. Original roman paving stones from the Cassia have been found near the former entrance. The first thing that strikes you on entering the church is that there are two churches, one upon the other, with opposite orientations.

Todays entrance is to the lower church (1032) which has three naves divided by columns with fantastic medieval capitals and decorated by frescoes of different periods but mostly from the fourteenth century. The façade which faces the ancient Via Francigena is made up with three pointed arches enriched by a Renaissance loggia from which Popes appeared to bless the faithful. The loggia was enclosed in the eighteenth century. Like the lower arches the whole is a blend of Romanesque and Gothic architecture.