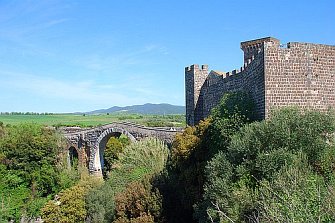 The beginning of the second millennium, a huge number of pilgrims began crossing through Europe in search of the lost Celestial Land, the Patria Celeste.

The pilgrims travelled to three major destinations:
Rome, the city of the martyrdome of Saints Peter and Paul, the founders of the Christian church - The Holy Land, site of Calvary, where the pilgrims sought out the places of Christ's Passion - Santiago the Compostela, the farthest point of western Europe which the Holy Apostle James chose as his final resting place.

Thus Europe became a vast web of roads, paths and routes all of which led towards these pilgrimage sites. The way to Rome was along what was probably the most important road of the times, the Via Francigena or Via Romea which led to the Eternal City from the Western Alps and the Rhineland and was used for seven centuries by sovereigns, emperors, plebeians and clergymen.

The Via Francigena led all the way from Canterbury to Rome and was one of the pathways of European history. It was a main thoroughfare along which hundreds of thousands of pilgrims passed on their way to Rome. In those days, the journey was not just an adventure or a risk but an act of devotion in itself, and the pilgrims would stop off along the way at places deemed holy by the Church.

We are able to reconstruct the itinerary thanks to a document left behind by Archbishop Sigericus of Canterbury who, upon his return from Rome to his dioceses in 994, wrote down the names of the places the had formed the stages of his journey home.

It is only natural that one thousand years later on the eve of a new millennium, there should be a reawakening of interest in the old route and a desire to rediscover a road that once represented unity and communication between the different cultures and ideas of European nations which are once again opening their borders. 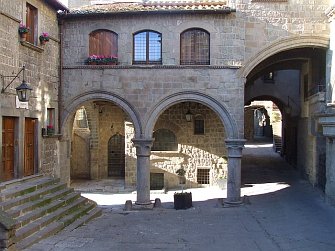 The Via Francigena bears witness to how even then there was a desire for unity in Europe. The Via Francigena cut through the Alps in the valley of Aosta and proceeded southwards through Piedmont, Lombardy, the flatlands of the river Po (Padania) before going through the Apennines near Berceto to pass into Tuscany and Latium, and then Rome.

This route is an essential and formative phenomenon in the history of Europe. Fragments, signs and reminders of its existence are still to be found scattered throughout our area. If we look at the Etrurian section, we can identify the route and the posting stages.

From Proceno, a resting station, the pilgrims moved on to Acquapendente which was a fundamental part of the journey as it contained a precious reliquary from the Holy Land, now kept in the Cathedral crypt. They then travelled down to Bolsena, an important town because of the Corpus Domini miracle, and on to Montefiascone, a mediaeval town even then known for its wine.

The next stage was Viterbo which, indeed, developed and grew thanks to its strategic position on the Via Francigena. Viterbo thus became a cardinal destination on the itinerary and was well supplied with hospices and lodgings. The traces of this concentration of pilgrim activity are still very much to be seen today.

After Viterbo travellers faced the obstacle of the Cimini mountains which they traversed by going either to the right or to the left along the Vico Lake. The more popular choice varied from age to age. One way led to Ronciglione and the little church of Saint Eusebius.

The other led through chesnut woods and we may still make out traces an old path that passed by the Cistercian Abbey os St Martins in Cimino. The pilgrims would then make their way to Vetralla where a country road led them to the little church of Santa Maria in Forcassi, mentioned by Sigericus. After this, the road led to Capranica Sutri, Monterosi and then the pilgrims left the Via Cassia for the Via Trionfale that led them into Rome at last.