Deprecated: preg_replace(): The /e modifier is deprecated, use preg_replace_callback instead in /var/sites/i/italianvillagevacation.com/public_html/index.php on line 183

Deprecated: preg_replace(): The /e modifier is deprecated, use preg_replace_callback instead in /var/sites/i/italianvillagevacation.com/public_html/index.php on line 184
 Villas & Gardens @ Italian Village Vacation 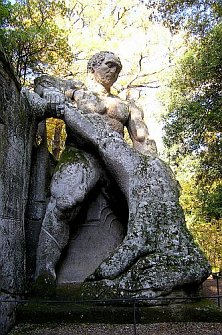 Not far from the village of Bomarzo (famous for its magnificent Orsini Palace) there is the so-called Park of Monsters or Sacred Wood, founded by Vicino Orsini between 1552 and 1580.

It lies on the slopes of a natural amphitheatre whose rocks were transformed in wonderful stone sculptures, derived from mithology or chivalry poems. The huge creatures, along with the Temple dedicated to Giulia Farnese and the Leaning House, make the magical and bewitched wood a mixture of frightening visions and attractive figures.

The most interesting sculptures are The Big Mask (or the Ogre) with a wide open mouth, the fighting Elephant, the Dragon and the Giant rending a woman. 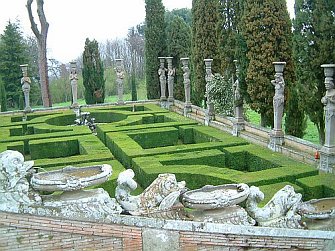 The fantastic Palace was built for Cardinal Alessandro Farnese in 1559-1575 (on the foundations of a previous fortress by Antonio da Sangallo the Younger), following a design by the famous architect Vignola.

It is one of the purest examples of architecture from the late Renaissance period.

The cycle of pictorial decorations in the interior of the Palace is the grandest monument to Italian painting from the latter part of the 16th century, where the meeting and the fusing of different techniques are visible. These were completed in 1583. The frescoes produced be the Zuccari brothers, amongst other artists were conceived following a period of mythological and heraldic celebrations of the triumphs of the Farnese family. Also the impressive building near the Palace where the Stables were located was probably designed by Vignola , between 1570 and 1585. 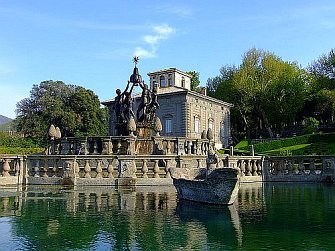 It is considered one of the most remarkable late 16th century buildings in Italy.

In the dense woodlands of the Cimini Hills, Cardinal Riario created a hunting reserve, called the Barco, in 1514.

Later a Bishop transformed the Barco in a vast park with fountains and built a Palace decorated with frescoes by Tempesta and Raffaellino Reggio.

Much later a Cardinal oredered a second Palace, frescoed by Tassi and Cavalier dArpino. Natural elements like water, the green of the vegetation and the stone of the building are fused together to form a single harmonious unit and a most beautiful example of Italian Garden.